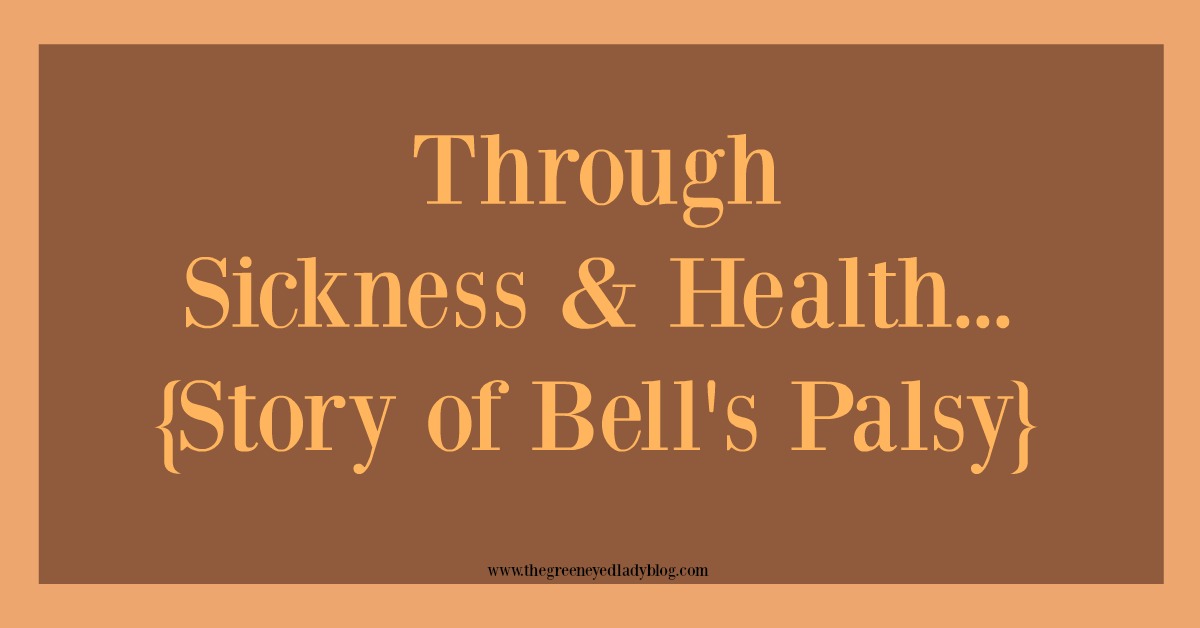 Many have heard of Bell’s Palsy but never had a first hand encounter with it. Well a couple of weeks ago I had a first hand experience with it because my husband had an attack while I was in Alabama. He told me he had it before but many times when he said he felt it coming on he would catch it in time and his face never had any effects…

Well this time was a little different…

When he first felt it coming on he went to Urgent Care…this was pretty much a pointless trip! They told him that it was a combination of stress, exhaustion and anxiety (hmmm this sounded pretty fishy…he doesn’t have anxiety issues) and he needed to get some rest. So since I was out of town with the kids I told him to make sure he got some rest.

The next day we were talking on a Video Call and I noticed his face was distorted…I tried not to let my expressions show and fight back tears but I told him he probably needed to go to the hospital because I think it was getting worse. The next morning he went to emergency…he told me that he had already gone through a series of testing and MRI on his head to make sure he wasn’t having a stroke. Talk about trying to fight back my own anxiety…JESUS!

Im 10 hours away, my husband is going through a medical emergency in my eyes and all I can do is basically talk to him from the phone! I think of my husband as The Incredible Hulk…he can pretty much handle anything!! But in this moment I could see the weakness in his eyes…he needed me and I couldn’t physically be there! I was there on the phone talking him through everything and trying to calm myself down at the same time.

Once I got home I just wanted to hug my husband!! One because I missed him, and because I wanted him to know I was there and he could lean on me…even though it hurt me to see him like this; those vows said “through sickness and health” so I knew it was my turn to be his superhero and help him get through this. Its been 3 weeks now and he is slowly getting better…but no matter what he knows nothing has changed and I’m here for him!

According to WebMD Bell’s Palsy…Bell’s palsy is a paralysis or weakness of the muscles on one side of your face. Damage to the facial nerve that controls muscles on one side of the face causes that side of your face to droop. The nerve damage may also affect your sense of taste and how you make tears and saliva. This condition comes on suddenly, often overnight, and usually gets better on its own within a few weeks.

Inability to close the eye on the affected side

Drooping of the affected side (within a few hours to overnight)

Teariness or dryness of the eye

Pain in or behind your ear

Loss of sense of taste

The cause of Bell’s Palsy is not clear. The nerve that controls the muscles on one side of the becomes inflamed, which is usually caused by a virus. Although the symptoms of Bell’s Palsy are similar to a Stroke…it is not a result of a Stroke or Transient Ischemic Attach (TIA).

In a lot of Bell’s Palsy cases it never needs to be treated. However, in Darrick’s case he was on a high dosage of steroid and antiviral medicine. Darrick was also instructed to do facial exercises, use artificial tears (eyedrops), and keep an eye patch over his eye from time to time to make sure it gets rest.

I have been keeping a close eye on him also to make sure he isn’t stressing about anything because although this is caused by a virus, you body is only acceptable to viruses when your immune system is down and that can be caused by stress!

FOLKS STRESS WILL KILL YOU…AND THERE IS NOTHING YOU ARE DEALING WITH THAT IS WORTH THAT!!!

I have been constantly stressing this to him. I know we have some goals we want to meet and we are working hard towards that but we need to learn to do what we can and let God handle the rest!

Have you ever been affected by Bell’s Palsy, or know someone that has been?