A few weeks ago Darrick and I celebrated his birthday. He is always pretty simple in his wishes of what he wants…this year he was adamant that he wanted to finish off his sleeve of tattoos. Its funny because he has changed so much since we have gotten together 6 years ago. I always tell him he is conservative (acts like an old man) but occasionally he reminds me that he is still has that streak of just “doing what he wants” (his VERY liberal side) and its usually something along the wild side…

Darrick pretty much had most of his arm tattooed, well the top part of his arm. So for his birthday he decided to get his forearm tattooed. When he first talked about this sleeve he wanted I was a little skeptical, but then he finally decided what he wanted and it made perfect sense.

I thought it was a good idea, the only question I asked was he going to be okay looking at it forever…and he said yes. Through this grieving process we pretty much let each other deal with it in “our own way” as long as its not in a harmful way or something that we will regret doing later on. Since Darrick is full of tattoos I knew why he wanted to get another and I knew he wouldn’t regret it.

So we were supposed to go to dinner after he got a tattoo….BUT those who have tattoos know that you dont go to the tattoo shop and wait for someone without getting inked yourself! HA! Is that really a rule?? Or is it that tattoos are contagious! 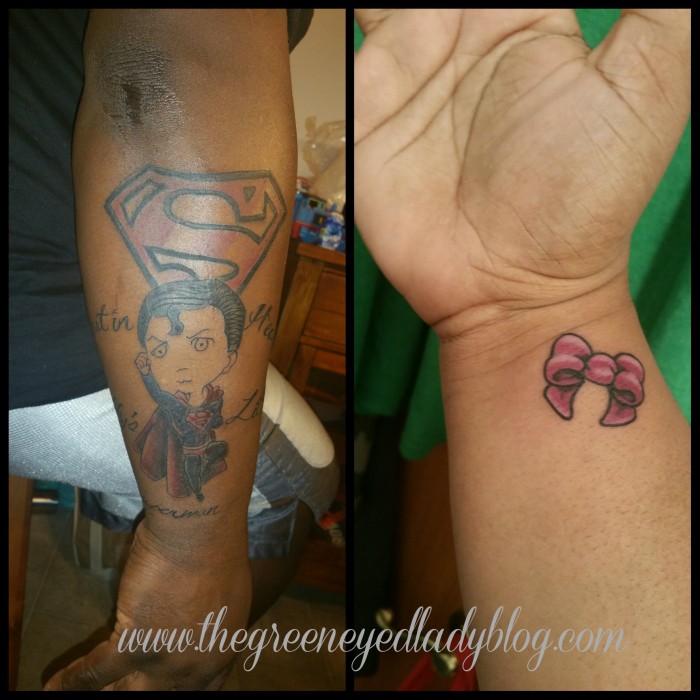 We never made it to dinner because our date night was spent at Assassin Tattoo Studio in Akron,OH!

I got a bow on my right arm…it was something I liked! I looked at a bow a while back but I said I wasn’t getting anymore tattoos, but hey since I was there why not get inked too!

I was going to get something Superman related, or Mommy related (because you know I love my babies) but honestly, after much thought I realized; I cant handle looking at something “superman” related everyday, and I do everything for the kids so I wanted to do something for myself!

So I came up with a Pink Bow (girly and my favorite color)…I searched google for the meaning of a bow: and it represents femininity!

Bow tattoos symbolize…femininity, presentation of a gift, remembrance, strength, love, beauty and unity (I LOVE IT)!!!! My bow can represent any of these things!!

Even though Darrick and I have a couple of tattoos, it was our first time going to this particular tattoo studio…Darrick will be back but I believe I am done with tattoos (I Think…)

Do you have any tattoos?