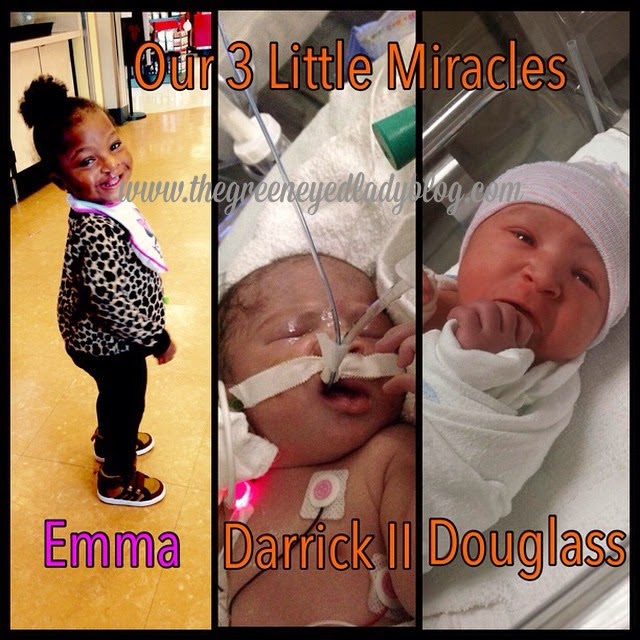 Last Thursday we welcomed the newest members of #TeamGodbott; Darrick II and Douglass James!
I was told to be at Labor and Delivery at 5:30am…and although I was very nervous we were there on time and ready to meet our sons! For many that follow me on Facebook and IG know that there were complications with one of the twins; so instead of making this a birthing story I will explain in a little more detail exactly what’s going on…
Darrick II was born first and he was the one born with complications. We found out at birth that he has a hernia in his diaphragm and a some heart problems. So basically a congenital diaphragmatic hernia (CDH) occurs when the thin muscle that separates the chest from the belly, called the diaphragm, does not form completely. This leaves a hole between the belly (abdomen) and chest.  With the hole organs that should be in the belly can slip through the hole into the chest. The intestines slip through most often. Other organs that can slip through are the stomach, liver, spleen, and, once in a while, the kidneys (but these organs did not slip through on Darrick…just his intestines). Along with all of this going on he has some heart issues too.
As of right now he is in critical but stable condition in the NICU. He has actually made some excellent process over the past couple days and as of right now if he is still stable they want do surgery next week.
Douglass James was born second and he is doing well. He was able to stay with us in the hospital room, and was discharged when I was discharged from the hospital. Douglass has been my learning baby…since Emma and Darrick were both placed in the NICU immediately after they were born I never had chance to have my baby with me right away. So he has his own special place like the other two (my three miracles)! This has been a learning experience to say the least; I have learned all about breastfeeding, and supplementing with formula. Making a decision on how to feed my child rather than someone telling how to do everything, which is a big step in my book! I have also learned how tired one can be from “feedings/pumping” that occur every 90 minutes to 2 hours (so I am up every couple of hours at night, Emma slept through the night…and every once in a while she would wake up hungry). My real wake up call was when Darrick went back to work and although I have help during the day…raising two kids is tiring; however, even with being tired I am anticipating the day of bringing home Darrick II!
Emma…well all of this is going on, Little Miss Emma has gone from being the only child to being a big sister. The first night at home was rough…she screamed for a while before falling asleep. And if you know Emma, she’s not really a crier at all but her personality has changed a lot in the last couple of weeks (her changes started to occur before I had the twins). She seems like she is adjusting, but she will “try-it and you” just because! We have noticed that she doesn’t like the baby crying and she will come and find an adult if he is crying. She is VERY territorial with her Dad, so if he is holding the baby he usually has to make room for her too! For the visitors we have had, she usually will grab them and take them over to her brother who is usually in a carseat or bouncer chair and do her version of an introduction. She also will go over to him to check on him and she sings, gives him kisses…we just have to remind her to be gentle! Now don’t get me wrong she’s always been sweet; but her stubbornness is at an all time HIGH! When it comes to someone talking to her, she will ignore you from time to time or try the screaming tantrum…so lets just say we have been working with her a lot (I refuse to have that tantrum child)!
How Am I…this the question that everyone has been asking! Well to be completely honest…Im heartbroken! I am thankful for my other two children who are healthy, however, the situation with Darrick II is taking a toll on me. When I was pregnant with Emma and we found out she had a cleft lip I had time to process everything; but with Darrick it has been a whirlwind! Everything has happened so fast…I know God has a plan but its been hard. I haven’t given up faith but its been hard to find that spot of motivation!  I try to hold on to our small victories; such as the decrease in his medicine, Darrick gripping my hand when I put it in the incubator, the nurse telling me he had an awesome night when I called to check on him in the morning…I even found information online and the end says its a long road but most kids go on and have no problems later in life…I hold on to stuff like that! But life has changed once again, and I cant say it has changed like I planned…but I guess I keep getting that lesson from God to let Him do the planning!