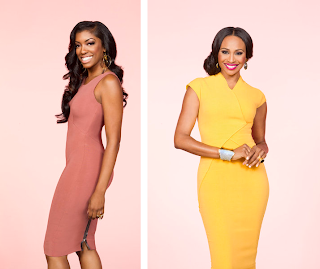 (pic)
While catching up on my DVR’d episodes of Real Housewives of Atlanta, in a scene with Porsha and Cynthia I was inspired to write a blog post about “strangers in your home.”  So I’m just going to give you a quick recap of the part of the show so you can follow me…
Porsha and Cynthia were working on the pageant stuff together and they were supposed to have a meeting at Porsha’s house. Porsha cancelled the meeting due to her husband not being home (he was out of town), and him not liking “strangers” in their home.
After Porsha cancelled the meeting at her house, she met Cynthia at her office and explained to her and her assistants (the strangers) that her husband has not met the assistants and this is the reason why she cancelled the meeting. After Porsha told this information to Cynthia and her assistants…there is an interview with Cynthia and she says something to the fact that Porsha is the Queen of her household, but her husband is CLEARLY the King! They eventually showed Porsha with her husband, and she was explaining what happened-and he said “this isn’t a place of business”…I took that as this is MY house and I don’t want everyone all in MY space without me being here!
Usually I watch the Housewives by myself with an occasional visitor (my husband),  but he really cant stand the Housewives. However, this particular part Darrick just happened to be watching with me, and said her husbands rules for the house make complete sense to me. He goes on to say, as a man you are the protector of your house and you aren’t to have anyone in your home around your wife or wife/kids when you aren’t there, and you don’t know who they are. For a minute I was sitting there thinking, this is overboard/he is overboard…but as he walked out the room I was sitting there thinking about the whole scene and what he said and I thought I guess it makes sense…
Does your husband allow “strangers” in your house when he isn’t there? The show made Porsha seem like she was crazy for repeating this, however, after much thought-she isn’t crazy her husband is simply protecting her! I thought to myself since I have been married there has never been anybody working in our house while my husband wasn’t home. I went on to think this is the reason women have a hard time in relationships because they wont allow a man to be the MAN! Yes, being married comes with rules…I have rules for Darrick and he has rules for me! And if one of the rules is simply don’t have strangers over, why would I jeopardize that for someone else’s business! Its not even Porsha’s business, its Cynthias’ so have it at your office! “The Place of Business” !!!!
Now prior to being married, when I lived by myself I had no choice but to be there with the repair guys. But you better believe I took all precautionary methods because after seeing my fair share of Lifetime movies you can never be too cautious (LOL…I’m being funny but so serious)!!!
If you saw this part of the show, how did you feel?
Even if you didn’t see the show…do you feel her husband is overboard? Or is he doing correct in protecting her?